CORONAVIRUS MESSAGE: We want to assure our patients that all Health Quest facilities are thoroughly sanitized daily and each piece of equipment is sanitized after every patient encounter. 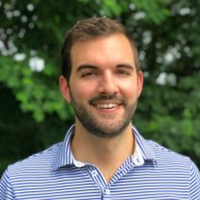 Riley Barrett is a Doctor of Chiropractic with PT privileges. In 2014 he graduated from the Palmer College of Chiropractic, Florida Campus, where he proudly earned his Doctor of Chiropractic degree with Magna Cum Laude honors. During his time at Palmer, he spent uncountable hours mastering his craft through learning and practicing many of today’s most popular adjusting techniques, as well as developing skills and interest in the fields of rehabilitation and soft tissue therapy. Dr. Barret also holds Bachelor’s degrees in Preventive and Rehabilitative Health Fitness and Exercise Physiology. When Dr. Barrett, his wife, and their two dogs made the move to Baltimore, MD., he began his chiropractic career as an associate at Spector Chiropractic, the longest running chiropractic office in Maryland. Three years later, he purchased Spector's Federal Hill office and launched CHIROWORx Spine & Rehab in its place. One year later, the Barretts teamed up with Health Quest to expand opportunities around the metro area for both practices. Today, Dr. Barrett and his family currently reside in the South Baltimore Community of Locust Point, where he enjoys playing golf, watching the O’s, reading, traveling, and frequenting all of the local food and drink stops around the city.

Thank you for subscribing!

You will receive important news and updates from our practice directly to your inbox.